This was so obvious. I was looking for a nice way to add color in the game and brother item so you can see if you where victorious or not, but wasn't satisfied. Well, I think that highlighting the reason is good enough.

So, this is the color code: if you see green, you won. If you see red, you lost. White is a draw.

On the Games view, the color is on the name of the opponent. 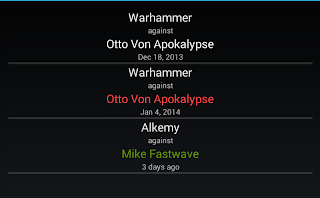 On the Brothers view, the color is on the informations about the last game you've played and concerns only that game.

You can update your app to get this improvement, or get the app from Google Play.
Publié par Unknown à 14:07 Aucun commentaire:

There was a long time since the last update of Brothers in Games. The recent release of BIG T3 is part of a general redesign. I wanted to keep the features available before touching the core app.


Brothers in Games have also been rebooted. First, it is now a Android 4-only app. Sorry for the users of old devices (in the Android way :/ ) but when the decision was made, most of the users where using a Jelly Bean or above version of Android.

This allows me to avoid all the mess about compatibility and provide the last features offered by Android.

The evolution of Brothers in Games in its V2 is still at a preview stage. The purpose of this release is to let you discover the new features and be able to provide some feedback.

Brothers in Games will focus on the people you've played with, so you can easily plan your next games. The main feature is to keep track of the games you've played. As a non-dedicated app, Brother in Games will remember those informations:

Getting your opponent from your contacts

Your opponents are people, not just names. You may want to call them for another game. So, you want to record their name, phone number, e-mail address... On a device, the best place to keep this kind of information is in your contact app among your other contacts. I think that this is the best rather than duplicate the informations. The feature is not available yet because I am not decided bout where to set the action, but from an opponent, you'll be able to open its contact informations on the native app so you'll can contact him the way you want.

Of course, with all those apps with bad behavior, you are concerned about the privacy of your data. This is the behavior of Brothers In Games when you want to add a opponent:
Your contact informations stored in the database are left on your device and are not sent to us in any way.


The My Games view lists all the games you've played. This is a simple listing displaying the basic information of your game. The details will be displayed on a detailed view which is still not available.

As I stated, this is a first preview. There are a lot of feature missing. For now and for this preview, all the data you are providing are not displayed. The game result and the notes are still missing. Don't worry, they are stored and will be displayed in the next update.

As you can add a game, you can't edit or delete it. This feature belongs in a selection or detailed view which is still not activated. So is the contact access.

I wanted to publish this preview soon enough so you can see the purpose of this app. You can update it now or get it from Google Play. The missing features will be added soon. In the meantime, you can review the app on Google Play of follow the Google+ page.
Publié par Unknown à 15:51 Aucun commentaire: