Time for a better information process

This blog was opened several years ago as I started developing the app that was once MiniWar Companion. The goal was then to have a single place where I could post update information about the apps. But over the years, several issues have risen.

So, starting today, this is where you will find information about Brothers in Games apps.
So, this is certainly my last post on this blog. I let it live because there are still links pointing here.

I hope to see you on the links given above.

I am currently working on some kind of filters for the list of tournaments on the Tournaments Tracker. I want to make it easier for you to access to an information of interest. So, I am adding what we can call filtered views so the list will filter the tournaments by country and/or game.
At this point, I have added that list view and the form from which you can set up a new filter.

But a problem arise last week and dealing with it will have some consequences which can delay the release of this feature.
To give you Tournaments Tracker, I need some place to store the tournaments data. For that service, I rely on Parse, a Cloud backend for mobile apps. Unfortunately, last week, the Parse team announced that the service will be discontinued. This have two consequences:


So, the consequence of the Parse-specific code is that if I want to finish the filters list view, I have to add specific code that I will have to get ride of later. The best thing to do is to start removing that code dependency right now. But that means to break what is done until now. Before doing that, I prefer to release a version where you can filter the next tournaments view.

The currently release gives you access to the filter criteria form. The next release will allow you to save your selection.

Because of the users management consequences I will have to deal with, I have disabled the sign-in. You will not be able to create a new mail account. If you have already created an account, you can still access to it. You can also log in the app using your Facebook profile.

The user management will be my priority for the next release, together with the filtering of the tournaments view.

Now one more thing. If you are an Alkemy player using the Alkemy Companion, you may have noticed the disabled Tournaments button. That button should work with this filter view. So of course, you can expect an update of the Alkemy Companion which will activate that button ;)
Publié par Unknown à 15:50 Aucun commentaire: 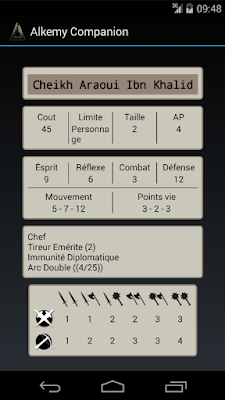 Good news for all Alkemy players, after several months in beta, the Alkemy Companion will be released as a 2.0 version next week.

As the previous version, the Alkemy Companion gives you access to the profiles, abilities and formulas so you can always check any data you want. This new version is finally designed for a modern Android device. Also, the data is now stored on the Cloud, which allows us to update it without releasing an new app version. The first time you check an information, it is backed-up on your device so if you will be able to check it without a network connexion.

So, keep an eye on your updates and follow us on Twitter @big_theapp.
Publié par Unknown à 22:57 Aucun commentaire: