Yet another score counter...

I have just added a new app on the Play Store. This is a personal score counter you can use for any game. You can get it now on Google Play. 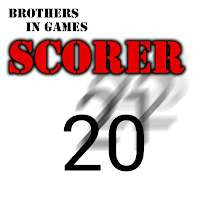 Brothers In Games Scorer is a very simple application : it displays a number you can raise or lower simply by swiping up or down. You can also set a value trough a dialog. The app keeps the last score even if you exit the app.

As a simple multi-purpose app, there is no start, high or low value. The app may not inform you if you won or loose by reaching a certain value, but that way you can use it on the values you need as you need. Track a score or life points, it's up to you.

The app was designed to use the touch interface. Rather than just pressing a button, to raise the value and another to lower it, you just have to swipe up or down. I would really love to have your opinion about this kind of interaction. Also, if you would want to see another kind of interaction, feel free to comment this post.
Publié par Unknown à 22:07 Aucun commentaire:


I have published on the Play Store a new stand alone Brothers In Games app focused on Table Top Tournaments (T3). This app is in its early version and still labelled as beta since it requires a lot of optimizations. Purpose of this app 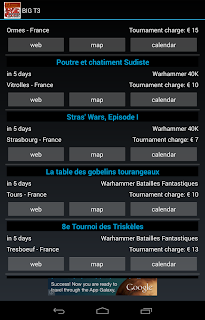 The purpose of this app is to focus on an easy access to T3 upcoming tournaments. The information displayed is based on the content of the RSS feeds. This is just a summary of the tournament information, so the interaction have been redesigned to display all the important data on the list view and provide an easy access to the other features.

Of course, this is a feature you can find in the current Brothers In Games app. But this app is being redesigned so I am extracting the feature. This will have several benefits. First, it will make bug fixes and improvements easier to publish. Second, as T3 is not available in every country or as all of you are not interested in tournaments (or at least those published on T3), this is the easiest way not to overload one single app with useless features. Third, if you are just interested in T3 informations, this is the easiest access you can get.

As it is in Beta, BIG T3 is available in the countries covered by Table Top Tournaments which are Germany, Austria, Belgium, United States, France, the Netherlands and Switzerland.

For a better overview of your tournaments, all the information is gathered on the list view. From any tournament entry, you can
You need to be connected to the Internet to get the tournaments list. Caching and filtering will come in a next release.

When you launch the app, it will look for the RSS feed from Table Top Tournaments. T3 do provide several local feeds, so the app will first check your location to select the country in which you are currently. This is costless as the app look for the last location recorded by the location service. If the country is among the available countries in the feeds, that one will be used, otherwise, it will be the international one.

The data is collected trough the RSS Feed. Depending on your Internet connexion, this should be pretty fast. Unfortunately, the data is incomplete in the feed, the location contains only the city. The app will then send other requests to the T3 server but this will take more time. As the data is updated, you may see the title change as the wording is not the same.

The app does not support yet filtering or country selection, this feature will come in a next update.

If you are a miniature games player, get the app now on Google Play !

BIG T3 app is provided as is. It requires an Internet connexion so your provider charges may apply.

Brother In Games apps are free to use as long as you accept them to display adds.